OoOooh! It's hard to contain my excitement. I almost posted this devlog a day early! (Happy Friday btw!)

So! This week has been amazing. Super productive. You wouldn't believe it.

I've finally bit the bullet and started converting the sprites to layered images. It's a painstaking process, having to slice the expressions and export them again, recode the character in the game with all the different image variations, and then actually go through the whole script to change the character everywhere they appear in the story. But the results… Oh the results! The sprites look much more crisp than before. And if you have been playing the current public release you'll notice that each character only had 6 facial expressions. We upped that to 9 on our dev release, and then… Thanks to the wonders of modern science and layered images, we upped that AGAIN to 81 facial expressions for each main character. 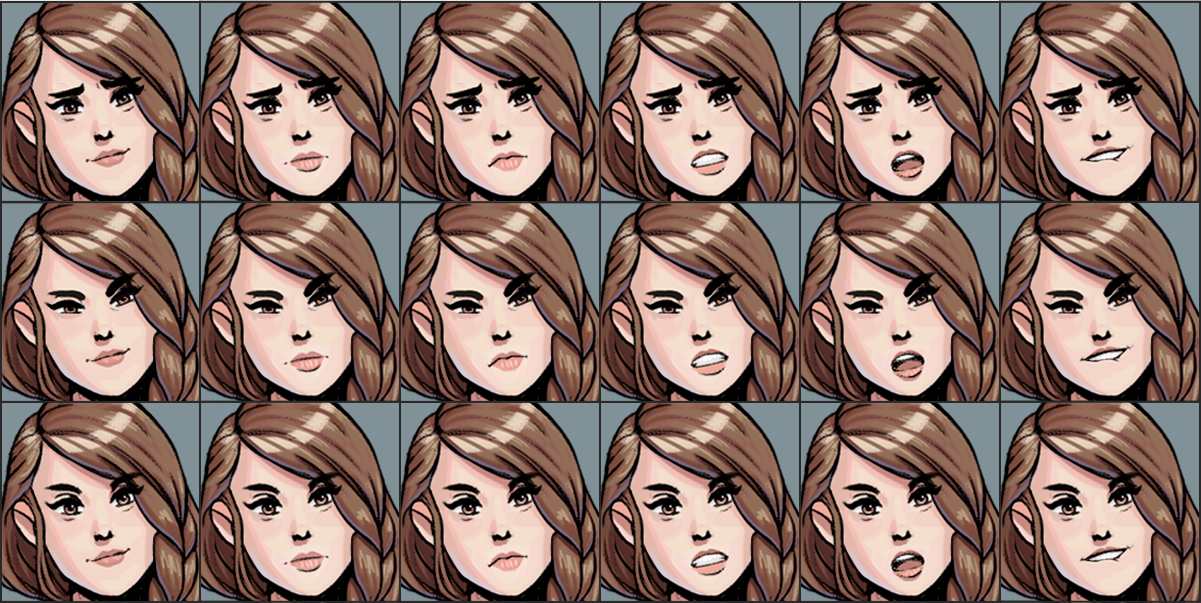 I also implemented the nude sprites with the new system, and to top it all off, the layered images decrease the total size of the game! I also implemented and tested the "Adult Content'' button that I mentioned in the last devlog. It's done and working. No sudden sexy surprise smut unless you specifically go looking for it.

Mayvheen, Veera and Veera's combat suit has been converted so far, and I've been working through the first episode to change the script so it works with their new sprites, with more characters to come.

While all this has been happening, I reached out to two additional character artists that are doing some trial designs for us while Zaph deals with some responsibilities. This is paying off in dividends, and we now have more sprites and much much more capacity for new designs, so much so that we're burning through our reserve funds. We've already started work on the new alien race that has only been mentioned in the game. This also opens the possibility to start working on more crew members and content for the Sol arc when/if the Tabitha ever returns to our solar system. (Lunar Spires, ambassadors, bureaucratic but fancy cocktail dinners… The possibilities are endless. All this costs a tremendous amount of money and I'm trying to think of ways to raise additional funds within the avenues available to us (As mentioned before, sadly Kickstarter etc isn't an option in South Africa) - I'll come up with something soon. I'm sure of it. Working on Infinite Stars, a labor of love, for over two years should tell you I don't give up easily.

AND if all of the above hasn't been productive enough, I've also made significant progress on the writing side. You'd think I would stop and call it a week, but nope. Even our secret little project has been making fantastic progress with our character art.

I'd love to stay and tell you more, but I'm excited to get back to work! But I will ask this before I leave you: consider making a pledge on Patreon so we can do more cool stuff like this at a faster rate! Have an amazing weekend!

What a great update! I can't wait to see the resultS of all that work :)

Oo, excited for ya! You guys're amazing! Take care of yourselves, and have fun with the development of Infinite Stars, cause man, oh man,  it's an awesome game :D

Very excited for you, sounds like you have alot going on!  I've been eyeing some of my less productive creators on Paetron and if they continue to disappoint Im considering moving my support from them to you.  Like everyone Ive got limited funds to contribute to the things I like and Enjoy.  Might as well spend them on things that are actually going somewhere!