Another week of progress. Yeah!

I mentioned the fundraiser in last week's devlog, and I'm happy to announce that we managed to raise 20K over the weekend for kids with cancer! It was exhausting! I spoke to almost 800 individuals in the two days, and walked roughly 30K steps up and down our exhibitors tent. My voice was a rasp whisper by Sunday evening, but it was all worth it. 20K for an amazing cause! You can also see a very cool Lego Hogwarts castle built by some friends of mine that helped attract foot traffic to our tent.

But let's be honest, that's not why you clicked on this link!

Progress on Infinite Stars has been good! The new written content is being finalized and I might start coding it as soon as next week! Happy Days!

At the same time we've been working on custom Mah'Abeu portraits loosely based on the faces of some of our Patrons. (Sure, other games offer to have your name in the game, but your face!? We're going the extra mile!) 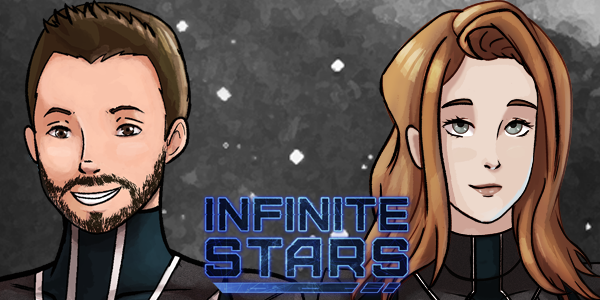 To avoid any potential issues, (C'mon, this is the internet after all!) the faces aren't exactly the same as the references supplied. They have some resemblance but you won't ever be able to look at a character and think, "Hey! That's my next door neighbor!"

The art style is slightly different from Zaph's, enough to be noticeable but close enough not to clash.

I'm still trying to figure out if I want these portraits with expressions, so they can be shown whenever your character speaks, or if I just want them for the Character ID screens. There is a financial and time cost implication that needs to be considered. We'll see.

Saeed has also been composing some new music for us, and I received the first sample late last night/early this morning. ::excited noises::

That's it for me. If you still want more, you can also check out the Draegan Herald devlog to see what I did with the rest of my time. Looking at these updates you might believe otherwise, but I swear I have a day job!

Have fun, thanks for all the encouragement, and stay safe!